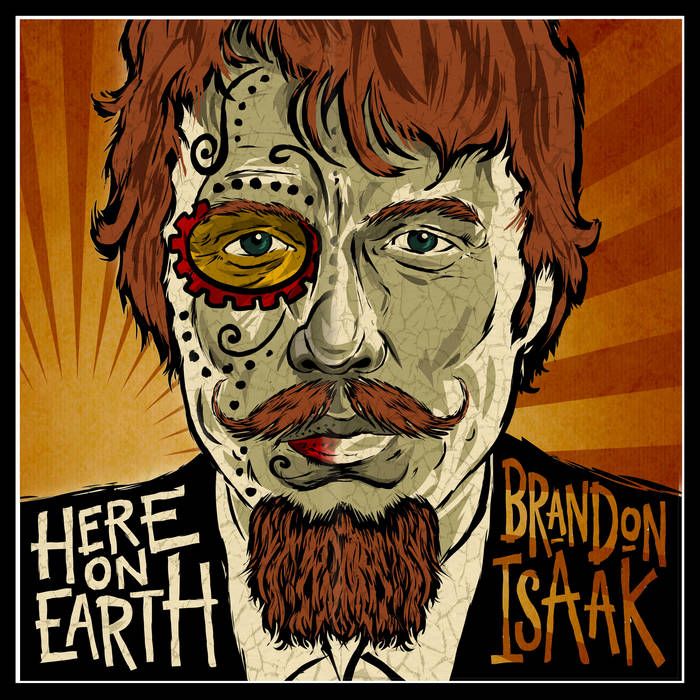 CJ This is the kind of blues best enjoyed on the porch with a lemonade, watching the breeze blow. Favorite track: Up The Frisco Line.

Nominated by 2014 The Maple Blues Awards for:

You might try to categorize Whitehorse native Brandon Isaak as a phenomenal guitarist – the licks rolling effortlessly off his guitar, whether electric or acoustic, are some of the finest you’ll hear anywhere. Or as a vocalist – so few guitarists are actual singers, yet Isaak eclipses the category with his sweet, gentle rasp and his elastic ability to bend your ear. How about his harp-playing? Having learned from one of Canada’s best, Dave ‘Hurricane’ Hoerl, Isaak has seamlessly blended his distinctive harp sound into so many of his original compositions that they wouldn’t sound as complete without it. You could easily brand him a singer-songwriter – he’s gone beyond his last solo release, Bluesman’s Plea, to craft yet another crisp cache of originals as valuable as anything you’d uncover off the Yukon trail. Each song tells a tale – Isaak’s storytelling abilities having blossomed into one of his most distinguishing strengths. You might throw all four labels together in an attempt to sum up the man’s ability with a song and his uncanny ability on all three instruments – but it wouldn’t capture the true sum of his parts. Isaak possesses an old-fashioned, deep-rooted musicianship right through to the bone. A seasoned road warrior and proud Yukon son, he lives to play and possesses and old-soul, natural capability to entertain on many levels at once. It’s more than a simple joie de vivre and he does it all so instantly, so casually and – seemingly – without any effort at all. He’s a throwback to a time of minstrels who played for their supper – or starved. Whatever his motivation, Brandon Isaak makes it all look and sound so easy as he channels his innate abilities and rich musical knowledge into each performance. Without blinking and with the utmost conviction.

Joined at the hip, here, by the mercurial acoustic bassist (and fellow off-duty Twister), Keith Picot, the added element of chemistry kindled by their friendship is distinctly audible. Produced by Brandon’s brother, Chris, Here On Earth is a family affair in which blood proves thicker than digital – the success of this pairing speaks for itself.

Release all expectations and prepare to be thoroughly entertained across Isaak’s usual grab-bag of genre-bent songs – each sounding instantly familiar, served up with conviction and revealing an undeniable ability to grab our attention and give us a loving, soulful shake.

He was a drifter, just drifting along,
Such a lonesome feeling, when your…
1000 miles from home.

Ridin’ the rails of an old freight train,
He looks outside and says…
Looks like rain.

Jim traveled to a faraway place.
Carrying something that he had saved.
A long lost promise, that he made,
Left her gold nuggets, on her grave.

Ridin’ the rails of an old freight train,
He looks outside and says…
Looks like rain.
Track Name: All Night Long
When the sun came up this mornin'… baby I was all alone.
And all I had, when I got up, was the message on the telephone
Yer talkin' about some so n' so, and goin' on n' on
But all I wanna know, is where were you,
All night long?

Trouble sleepin'… yes you was on my mind.
I didn't know what you were doin', I didn't know if you're alright.
I couldn't understand, a thing you said, so please don't get me wrong.
All I wanna know, is where were you,
All night long?

Ohhh oh oh wee… the truth will set you free.
But I gotta bad bad feelin', so please tell me that I'm wrong!
Where were you,
All night long ?

Now your hair's___ all messy, get it off your chest…
Open up to me baby, and might I suggest,
That you tell me mama, just what's goin' on
Start by telling' me, where were you,
All night long?
Track Name: Gamble On Love
I don't play no black jack.
Always over twenty-one.
I'm not in, to poker baby...
No flush, no straight no run.

Me and my money,
You can't tear us apart.
I just gamble on lovein' baby, and I
Bet with my heart.

So hold on to your dice baby, * stay on the 1 after bridge *
Cause I always seem to loose.
But when it comes to lovein'...
I'll take my chance with you.

I don't like to take chances,
When there are no in-betweens.
And Texas hold em, I'll always fold em,
And I can't stand slot machines.
Track Name: Meet Me There
I don't know when , I don't know where,
It don't really matter , Just meet me there

I don't have the time, And don't know the place,
only the Lord knows, so be the the case.

Funny how the time slips away,
That whistles blown', ya got-ta board that train…

There comes a time in everyone's life,
When you got to cross, over that line...

( Chorus )
Track Name: Dead Ass Fool
You know I love you baby,
But yous so cool and crule.
Long as I gunna love that gal…
Looks like I gonna be her fool.

Give her all my money,
And I treat her like a queen.
I’m that womans fool,
I let her do most anything.

Now that woman tried to kill me,
Man now that ain’t right.
If I stay with this woman,
I’ll be one dead ass fool.

( Verse I )
Track Name: City Lights
Now pack your things;
Honey we movin’ on.
These city lights;
It’s really got me down.

We a movin’ out;
Way out in the woods.
This ol’ city life;
Won’t do you no good.

No more traffic;
And no more waitin’ in line.
Just a lil’ piece of land:
But a big piece of mind.

We’ll be so happy;
Now you just wait and see.
A simple life;
The way it’s spose to be.
Track Name: Dressed 4 Heaven
3 piece suit, Sunday shoes…
I’m goin’ home did you hear the news ?
Polished my nails, tie’s in a bow…
Well I’m all dressed up and I’m ready to go.

Combed my hair, part down the side… pressed and
pleated pants, I’m dressed to the 9’s.
I’m good and ready, and this I know…
All dressed up and I’m ready to go.

All dressed up and I’m ready to go.
I’m all dressed up, I’m gunna hit the road.
I’m good and ready, so swing it low
I’m gunna look, my best, when I meet my lord.

You see me smilin’ it’s a natural fact…
I’ve lived a honest life and wouldn’t turn it back.
I got this suit, a long time ago.
All dressed up and ready to go.

Featuring Oakland sounds from the Smart Bomb collective and Samplelov.